Benefits Fraud Is Increasingly Becoming An Issue For Employers

The YXE Benefits is the simple, stable, smart choice for business; combining accessibility, flexibility and the stability of pooled benefits. Saskatoon companies choose the group plan because it offers unsurpassed value & outstanding customer service. The group benefit plan is for members of a Chamber Of Commerce and it is one of the many wonderful benefits and opportunities that come with a membership!  In our latest post, we discuss benefits fraud and we also share some tips for employers.

Is benefits fraud a widespread problem? 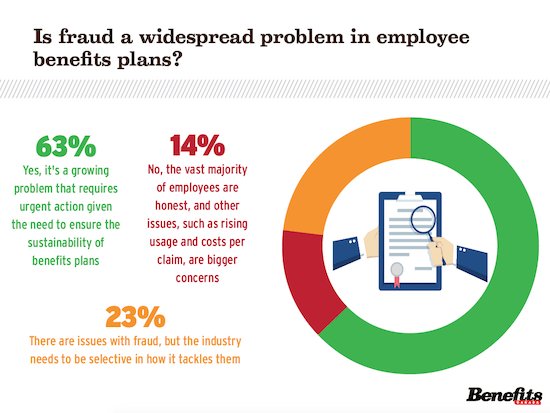 Benefits Canada held a poll recently and asked the question of whether or not benefits fraud is a widespread problem in employee benefits plans. The majority (63%) of respondents said fraud is a growing problem that requires urgent action due to the need to ensure the sustainability of benefits plans. Some 1 of respondents said it’s not a widespread problem, the majority of employees are honest and other issues such as rising usage and costs per claim are much bigger concerns. Another 23% said there are issues with fraud but suggested the industry needs to be selective about how it addresses them.

In actual fact, according to the Canadian Health Care Anti-Fraud Association, fraudulent claims cost the industry between $1.2 billion to $6 billion every year!

1. Keep a close eye on things.

Begin by staying vigilant, says Feher. “Do a thorough retrospective review of the claims utilization, be it drug, paramedical or health services.”

He cites a case where his team had to ask an insurer to change its claims adjudication process for support hose because a group was abusing the benefit. “Manulife was paying $200 per pair, for up to four pairs a year. We had 40 people maxing that out. They were either sharing them with family and friends or getting a kickback,” says Feher, noting it was costing the employer $20,000 a year. “Eventually, Manulife had to change their system, and now a $200 annual maximum has become the norm. We reduced claims to the benefit by 75%.”

Feher also encourages employers to consider the purpose of the benefits plan: Why they have it, what they expect from it and what they want employees to gain from it. Answers to those questions could lead to better perspectives and solutions. “For example, your overall costs may be in line with your budgeting, but if those claims are only being utilized by five to 10% of your employees, is that the best use of your dollars?”

Sometimes, employers have a good reason, says Feher. “I had a client with an employee whose daughter had very specialized needs. And the employer wanted to help.” In other cases, it may be outright abuse, he adds. “In one case, we noticed a huge surge in claims for eczema drugs. Upon review, we saw 20% of the employees making claims that were not traceable to the work environment. We ended up putting in a drug cap that was the best solution available.”

3. Educate employees about why they should care.

Ignatz says employees often have a sense of entitlement when it comes to benefits, especially when they contribute to the plan. The attitude is insurers will still make big profits, regardless of their claims.

But benefits plans generally don’t work that way, notes Ignatz. “When you commit fraud, you are really reaching into the pocket of the person next to you. They end up paying higher premiums or losing benefits because the employer can no longer support the claiming patterns.”

Therefore, it’s imperative that employees understand the cost of fraud. When employees come to realize they’re reaching into other people’s pockets, it becomes personalized and they’re more likely to follow their better nature, says Ignatz. “Once they understand that, encourage them to stay vigilant of providers misusing their plan dollars. Most insurance companies facilitate anonymous tip reporting — usually by phone or online. Make the presence of these services known and encourage members to use them when appropriate,” he adds.

Employees also need to understand they can’t blindly trust their health-care service provider. Many clinics make submissions on a person’s behalf, which can lead to overbilling, warns Ignatz. “So when in doubt, ask for clarification. Know what your plan is being billed for.”

For example, people are often shocked to learn that a unit of dental scaling is 15 minutes, says Ignatz. So when the dentist bills for four units, it means the employee sat through an hour of teeth scraping. “When a patient knows things like these and asks probing questions, the provider is less likely to stretch the truth.”

4. Get creative with plan design.

Plan design is the best protection against fraud, according to Ignatz. Combined and family maximums, as well as benefits for just the employee, are certainly worth considering. “Does it make sense for an employer with office workers who primarily sit all day to offer to cover orthotics?” he says. “Even an employer whose employees work in a warehouse could consider covering orthotics just for employees and not their dependents.”

Copayments and deductibles are another effective prevention mechanism because they force plan members to take more responsibility for the cost and frequency of their claims submissions, notes Ignatz.

Health-care spending accounts also help deter fraud to a degree, says Ignatz. “Not only is it a finite amount, but that amount is displayed at the bottom of each explanation of benefits. Members see that amount decrease with each claim and they generally want those funds to be there when they need them for legitimate expenses.”

We encourage you to connect with us on our new social media platforms on Facebook, Twitter & Linkedin.

Have your say: Are new sick day entitlements a concern for employers?